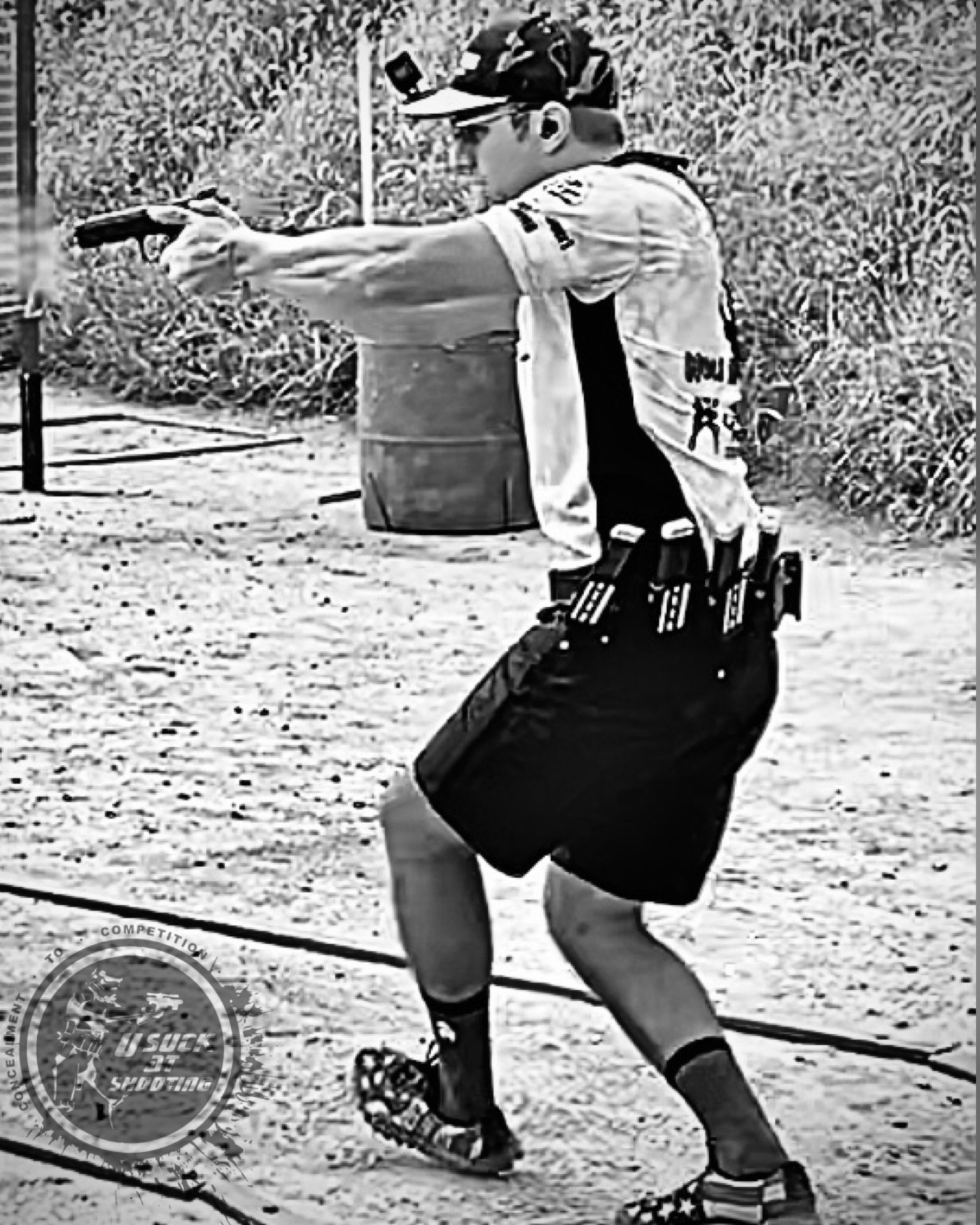 As a responsible person that may have to use a gun against a real threat, you should take your proficiency with that gun very seriously. As a professional who carries a gun for a living, the training your agency or unit provides is likely appropriate but very infrequent with extremely low standards.

Most military and law enforcement officers are below average shooters.

I have had the opportunity of attending several different training schools. Two of the schools were entry-level. While the two were 7 years apart, there were stark differences with the style and approach to firearms training.

The first school applied techniques that are no longer in most training programs. Techniques like, hard front sight focus and pinning the trigger to feel the reset was emphasized but never abandoned later in the program.

The first couple of days in this program, I was shooting rounds off the target and believed I just wasn’t grasping marksmanship at all. While the instructors still could not get through to me, I decided to explore. I attempted to self-diagnose my issues by observing my shooting. I was able to learn that allowing the gun to surprise me as I pulled the trigger resulted in better accuracy. This would be my temporary path to success. With the incredibly low qualification standard, I was in the top five shooters by the end of the program.

Speaking with people who have recently attended this same school and other similar schools, I have learned they are still teaching the same things. In 7 years, they have learned nothing and the standards have not changed.

Looking back, I now know their program was subpar. It was so obviously filled with a lineage of instructors taught only by other law enforcement instructors. The instructors’ only shooting experience came from work and their understanding of shooting was slight. The regurgitation of information and cliché sayings was repulsive. The instructors applied little to no personal experience. This broken training system was fed to officers throughout their careers.

I am a firm believer that there is no absolute way to do anything. I believe in results. There are better ways to do things. So, is it complacency? Is it a lack of interest in training? Is it budget? Why do law enforcement training programs resist change? Maybe they truly believe their way of teaching and their methods are somehow superior to newer/ proven ways or they are just unaware of what works.

Although there is a clear pattern of below-average instructors producing below-average shooters, there is a small percentage of law enforcement and military with good instructors and good shooters. It is fair to assume that those people are either paying attention to competitive shooters or compete themselves.

If you don’t have a passion for something, don’t expect to get good at it.

Between training schools, I maintained a close relationship with the shooting industry. I worked part-time at a range and was able to meet many new people. I dabbled in some in-house practical shooting stuff, but I was yet to dive into a real practical shooting sport.

Fast forward 7 years to the second training school. This training cadre did their homework and developed a program that applied proven techniques from the competitive/practical shooting world. The instructors were trained by competitive shooters and were active or former competitive shooters themselves. This brought personal experiences to the program rather than regurgitated information from other instructors. Techniques included prepping the slack out of the trigger, resetting the trigger during recoil, target transitions in recoil, and proper dry practice techniques. The quality of training was on a higher level and one could argue that budget could have played a role in that.

Be the change you want to see — get better on your own.

After a few years of training with good shooters, I took it a step further and attended a class with World Champion, JJ Racaza. I was later encouraged to compete in the USPSA. I did not want to be embarrassed, so before going to my first match, I consumed plenty of information about the USPSA. I also had to prepare my ego for a savage beating. Being a “good shooter” in the law enforcement world would mean very little compared to USPSA standards. Since beginning my practical shooting journey just 18 months ago, I have become twice the shooter I was. I will save my practical shooting adventure for another time.

While some aspects of practical shooting sports are not so “practical”, speed and accuracy are always being pushed. These two pieces directly translate to being a good shooter in any application. Like with any sport, a passion to be better will result in a consistent practice routine. Practice allows the athlete to perform at a subconscious level of skill. Practice for a shooter means manipulating their gun without thinking about it. Translate this to everyday life. When faced with situations where decisions are made under extreme stress (a USPSA match, a real threat), subconscious actions will drastically increase success rates. Imagine trying to use a gun under stress but also having to think about aligning sights, grip pressure, trigger press, focus type, stance… that situation is likely not going to work out in your favor. Now imagine you had to think about none of those things, they just occurred without conscious awareness.

Something has been lost… maybe through ignorance.

Why are so many training schools failing to seek out the best shooters, learn from them, and apply those techniques to their firearms program? This question is not asked enough. It has been done in the past but seems to have been abandoned.

If you take a look back at some of the ideas and principles taught to military marksmen in the 1940s, you will see a direct resemblance to what is being taught on the competitive side of shooting today.

Shooting to Live is a book written by William Fairbairn and Eric Sykes in 1942. There is dated information, like carrying a handgun without a round in the chamber. But, more importantly, the book discusses techniques like,

“He should then be told to keep both eyes open, concentrate his gaze on the center of the figure target, bring the pistol up quickly and fire immediately as it covers that point on the target on which his eyes are focused…” (Fairbairn & Sykes, 1942)

Sounds remarkably similar to target focused shooting with two eyes open. Although this is a relatively new concept for many shooters today, it is common and encouraged in competitive shooting sports.

Has the military and law enforcement training community been misled?

Fast forward to the 1950s. This is the timeframe where Lt. Col. Jeff Cooper developed and taught the “modern technique.” This was later translated into book form in 1991, known as The Modern Technique of the Pistol by Gregory B. Morrison and Jeff Cooper. Among many dated techniques, this system encourages the use of the Weaver-style of shooting. Arguably, Jeff Cooper codified the techniques in many law enforcement and military training programs. After viewing many of Jeff’s videos, I discovered much of what he was speaking about to be comparable to my experience in the first training school I attended.

In 1990, Brian Enos, an established competitive shooter, authored a book titled, Practical Shooting: Beyond Fundamentals. This book recognized the best fundamentals, based on tested theories and subsequent positive outcomes, for practical shooting at the time. Despite the amount of time passed, the book is still relevant compared to today’s shooting techniques. This book more closely reflected the training experience in the second school I mentioned.

Most noteworthy is the timeframe in which these two books were published. Jeff Cooper’s techniques were likely being spread long before his book was published. It could also be argued that many of the fundamentals that Brain Enos talks about were also being taught well before his book was published. Taking the publishing dates at face value, both books were published within a year of each other. Why would military and police training cadre choose to discount Brian Eno’s book for over 30 years? Is it because there is an old stigma that “Competitive shooting will get you killed in the streets?” Is it because Jeff Cooper’s military background was more respected than a civilian competitive shooter’s opinions? Was it because there was no clear link made from military / law enforcement shooting to competitive shooting? Were they aware of material like this? Why was there a resistance to change?

I believe I have only begun to answer why this is such a common occurrence. I had been working in law enforcement for seven years before I was told about Eno’s book. This is a problem and a reflection of how secluded the law enforcement training community remains as they continue to teach young officers how to shoot. Concurrently, another world of innovation, refinement, and pushing limits continues to thrive in practical shooting sports.

Shooting is shooting. There are no tactics on the flat range, particularly in entry-level programs, it is raw marksmanship. The “scan and assess” range theatrics can be saved for force on force and Simunitions type training. If it is done, be deliberate. You are observing other targets, people around you, and their hands. Do not scan to look cool.

I would not go to a competitive shooter to learn CQB principles. In the same breath, I would not pay a tactician to learn the fundamentals of marksmanship (unless they also compete).

“How do I start competing?”

YouTube is a great resource. Make sure the source of the information is credible. A good way to know if a person is credible is to look at their USPSA classification or their major match record in the sport they compete in.

Podcasts, like Firearms Nation, have great information. I recommend episode 122 with Frank Proctor. Because Frank comes from a military and competitive shooting background, I think he is a great resource.

Team Recon & Sniper Foundation delivers reliable information and provides an effective path for current and former military to get involved in shooting sports. Additionally, I want to thank Mike over at Team RSF for pointing me in the right direction with much of this information and encouraging me to compete in the USPSA.

Next, make an account on the PractiScore website. Find a local USPSA match, sign up and go to it! Lastly, if you want to get good, start PRACTICING NOW! Get after it!

Feel free to message me on social media with any questions about the gear or dry practice programs I have used. Also, let me know how you are doing in the practical shooting sport you chose.